What is Multiple Sclerosis (MS)?

Multiple Sclerosis (MS) is believed to be an autoimmune disease which primarily causes central nervous system problems. In MS, the insulating fatty material surrounding the nerve fibers, also known as myelin, which functions to speed signalling from one end of the nerve cell to another is attacked by cells of the immune system causing problems in signal transduction.

Onset may occur at any age, but predominates in ages 20 to 40 years. An appearance of MS in childhood or after age 60 is relatively rare. Women are more often affected than men with an estimated ratio of 2 to 1. If you have MS you are not alone. In the UK 100,000 are affected by MS. 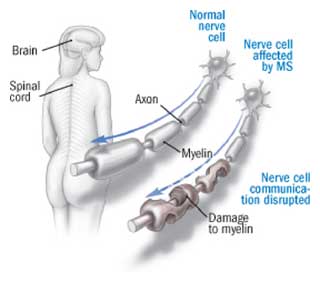 There are four recognised patterns of MS, each with its own characteristics:

Someone with a small number of relapses followed by a complete recovery may be described as having benign MS. It is only possible to make a diagnosis of benign MS once someone has experienced little or no disability for a period of 10 to 15 years. However, a relapse may occasionally occur after many years in which the MS has been inactive.

Most people are diagnosed with relapsing remitting MS. This is when relapses (a flare-up of symptoms) are followed by remissions (periods of recovery). Relapses are unpredictable. They can last for days, weeks or months and vary from mild to severe. During a relapse there will either be new symptoms, or a recurrence or worsening of previous symptoms. Any changed or new symptoms must last for at least 24 hours to be described as a relapse. During remission, symptoms can disappear completely, although sometimes people make only a partial recovery.

In primary progressive MS, symptoms steadily worsen, resulting in a continued progression in disability without distinct relapses and remissions.

Most people who have relapsing remitting MS eventually develop secondary progressive MS. This type of MS is identified when someone’s condition becomes steadily worse and their disability progresses for a period of six months or more, whether or not they continue to have relapses.